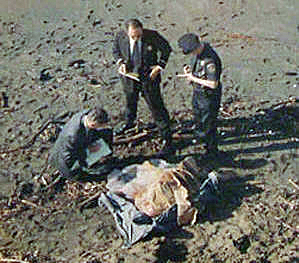 A little after 7 this morning I saw the grossest thing I’ve seen since I’ve been in the business: A bundle with body parts inside washed up on Ocean Beach at the foot of Pacheco Street in the Taraval district. We took a ride out there to take a look.

That was a mistake.

It was a white man’s headless corpse. His dick and balls had been cut off, and his intestines spilled out through a large gash in his stomach. Both arms and his legs were pulled up to his chest and held in place by wire. He looked like a big raw turkey.

Someone’s gotta be either completely nuts or a stone-cold savage to do something like that. This one is going to stick with me for a long time. It’s the kind of stuff that is really screwing up my head — particularly when people say they fear the cops or call us “pigs.”

Hey, we’re the good guys. Don’t forget it. We’re all you’ve got to protect you from the fuckin’ crazies in this town. Open your eyes, people — there are lots of maniacs out there.

City’s gettin’ to be a scary place. This might be tied to the same guy or guys who kidnapped a couple back in October and hacked the wife to death. Plus, we’ve got reports of a series of random street shootings of white victims by blacks.

Merry Fucking Christmas.   Got the holiday off tomorrow—but no plans.