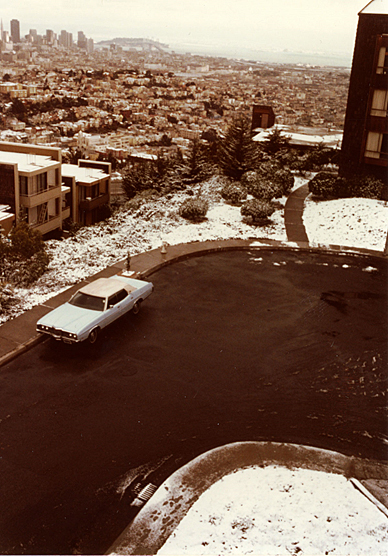 The snow is gone, but Charles Gain is still Chief of the San Francisco Police Department.

I’m sorry, but I can’t take this seriously. Not to be cynical or a Poor Me … but as I read it, they essentially don’t want the SFPD to piss people off, so we’ve stopped busting the whores. Now the streets are loaded with streetwalkers, and the pimps are cruising around in their Cadillacs — doing the gangsta lean and smirking at us.

There are still a lot of crazy people running around killing people. But sometimes it seems the citizens are more afraid of the cops than they are the crazies.

I think if you want to cut crime, pay the cops what they’re supposed to receive and turn law enforcement into a respectable occupation.

So what comes from Mayor Moscone and the Board of Supervisors? They dick us around on our pay.They bring in Gain, who’s the complete opposite of what we need. He doesn’t want to wear the uniform – instead, he wears Pierre Cardin suits to show us and everyone else he’s not a San Francisco Police Officer. Yet he’s the Chief!

The strike was wrong. I knew that. But how the city treats us is more wrong.

I’m 25 years old. What kind of future do I have here? Essentially I have to deal with this kind of crazy shit until I can retire on Tuesday, September 11, 2001, with almost 30 years’ service, at age 51.

Wonder what the hell the world is going to be like on that day?