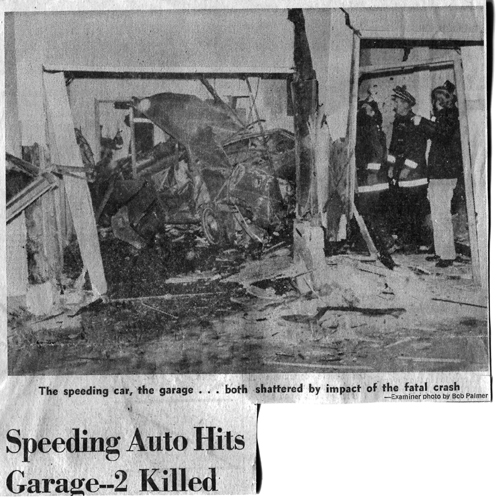 This cop life I’m living is really over the edge, sometimes.

Like tonight — a double fatal auto accident. I was working with Paul De la Fressange, and at 0300, we got this call: “529 Explosion.” We arrived on the scene expecting to see a collapsed building in the street …

. . .turned out a big red Ford sedan had crashed at high speed into the garage of an apartment house. We ran in where the driver was slamming the head of a woman lying next to him into the dashboard. He was yelling to her to wake up. She was dead.

We called for the SFFD and smashed the driver’s window, but he’d already crawled out. Still inside, though, was second woman who’d slid under the driver’s seat and was trapped. We pulled the back door open, but by now we were standing in the gas pouring out of the tank.

I reached in to touch the screaming woman when she suddenly went limp and died.

SFFD Truck 10 and Rescue 2 showed up and took over.

Hung around for an hour

Turned out the 20-year old prick driver was from Ohio and had picked up a couple hippie chicks hitchhiking in the Haight. To impress them, he started hauling ass at about a 100 mph around the district — until he lost control and crashed.

When De la Fressange suggested we go to lunch, I thought he was kidding.

“Let’s go celebrate being alive,” he’d said. De La Fressange is cool. He’s about 30 and did two tours in Vietnam. I guess he knows the deal.