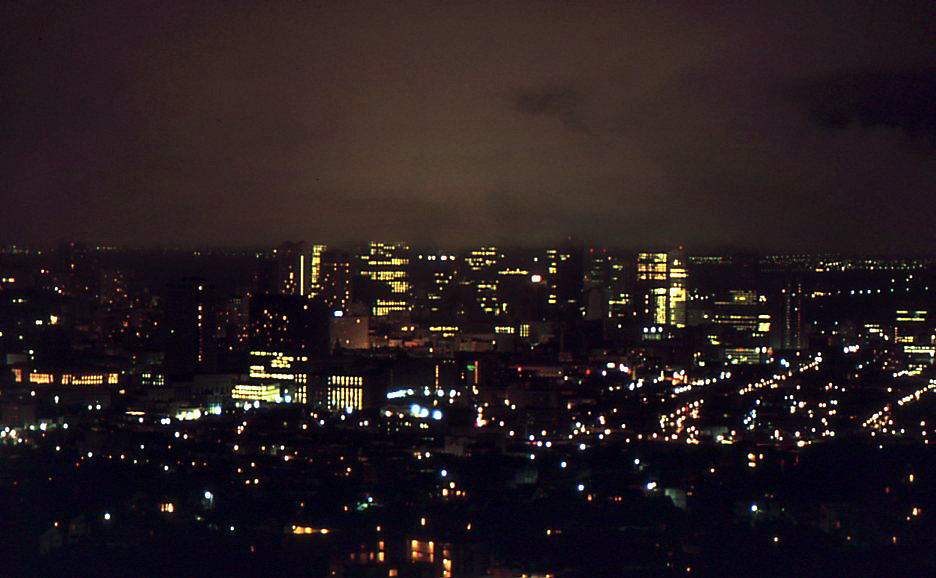 A curious-looking fog hung over the city tonight.

I’m standing at the open window looking out at the weird fog,making the city look like a smokey bar. My fireplace is crackling, and I’m getting drunk.

I don’t get the concept that if you fuck up on this earth …  then you go to Hell.

This world is the real Hell

Think about it … how much worse could Hell be than the City and County of San Francisco right now?

I worked the 2-car with Morehen from my Academy class. Not too much doing at the start of the watch.

The big deal was the Ali/Frazier rematch shown on TV at Winterland, and lots of people were out on the streets. At 7, we got busy handling runs in the district because so many guys were watching the fight.

At 1950, Morehen and I were at Oak and Divisadero when a 217 shooting call came over the radio — at Divis and Geary. Morehen was driving, and we rolled down Divis  arriving at Geary at 1956. On the northeast corner, a woman was lying face down, moaning, “I hurt, I hurt.” A small puddle of urine lay underneath her.

As we tried to gather a description from the crowd gathered around her. One black man ran up to me and said, “A white guy did it.” Another witness, who was white, came forward and said that a black guy wearing a skull cap shot her and ran to a white Cadillac.

Needless to say, the scene was tense when Park ambulance 82 arrived  — and at the same time — KGO-TV appeared with bright lights and cameras rolling. We helped lift the woman onto a gurney and carried her to the ambulance.

Right after we radioed in a description,  Morehen screamed, “Fuckin’ assholes.” He’d found two empty .32 shell casings. Then, a couple minutes later, the Inspectors from the crime lab showed up to search for additional evidence.

A couple minutes after our 217, another one, committed by the same guy, went down at Scott and Fulton. Ten minutes later, a third shooting occurred at 9th and Howard. Later in the evening, two more were shot out in the Ingleside. Each shooting more shocking than the previous one.

Back at the station we paused while writing the reports to watch ourselves on the 11 o’clock “Newscene.” We learned four people had died from the shootings.

It sounds strange to say this, but I’m getting used to all this violence. The SFPD isn’t a lot of fun and games at the moment. Everybody is on edge around here wondering what’s going to happen next? 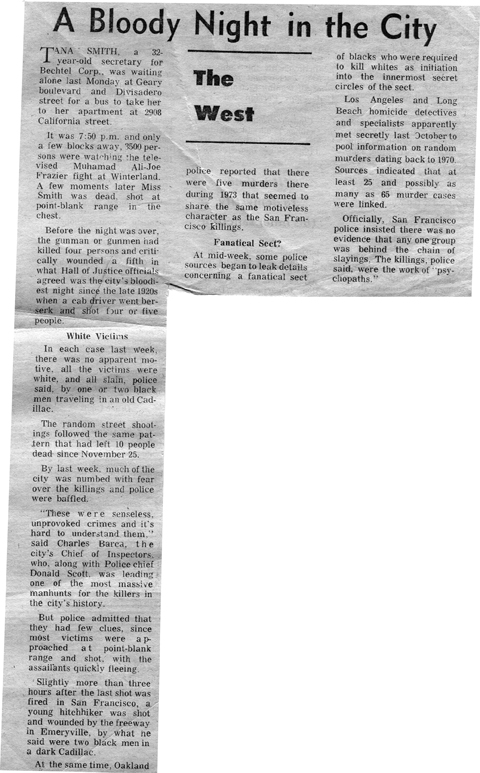