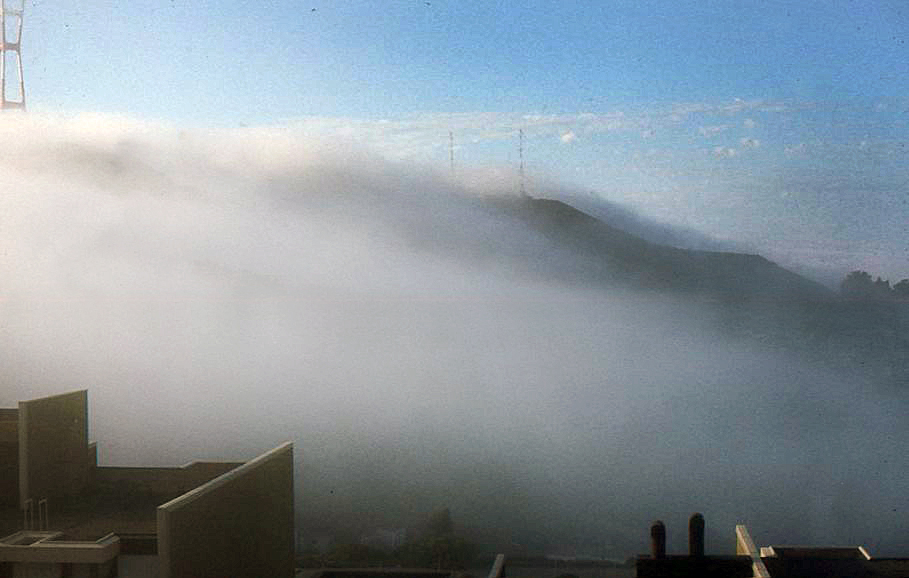 100 degrees in San Francisco today! But the fog is rolling in now . . .Just a horrible day.

I have to make some decisions about what I want to do for the rest of my life. I’m almost 37 years old, and I’ve had enough of this shit now.

This afternoon I got involved with a super asshole on Masonic Avenue who thought he was some sort of stud and was beating his old lady. Meantime, he has this dumpy chick with him he was banging in the house. So the wife calls us, and we got into it with him.

So we parked the radio car in the bus stop on Masonic Avenue near Hayes Street.

“Hey, Pole-lease who’s yah all gonna arrest,” some 7-year-old kid yelled at me as we parked. He was playing two-square game on the sidewalk with his friend.

“I’m not going to arrest anybody, fellas,” I said.

The kid gave me the “stink eye.”

“Let me see yo gun,” he said as this huge black woman approached. I ignored the kid’s request and watched this woman’s bowed legs stagger under folds of fat that jiggled as she walked on her heels.

“Yah all leaves the Pole-lease alone,” she said and shooed the kids away. She held an ice bag to her left eye. The kids resumed their game.

“The mothafuckers upstairs with a white woman,” she said pointing to a gray two-story flat behind her. “I’m tired of him whooping me upside the head. I want his mothafuckin’ ass arrested.”

“You gonna sign the citizen arrest card?” I asked.

“Damn straight, I wants his mothafuckin’ ass in the jailhouse.”

So she led us up to her building, then waited on the sidewalk. The front door was slightly ajar and opened to a flight of stairs leading to the upper flat. I walked up to the open door and listened. I couldn’t hear anything.

“Hello, Police…. We’re coming in,” I said again. This time I placed my hand near my weapon and leaned against the left wall to reduce my silhouette.

I was working with Harry, who fell in behind me as we advanced up the stairs. Every few steps we stopped and listened. As we neared the top of the steps, I heard footsteps and squeaks on the hardwood floor.

Suddenly, at the top of the stairs appeared this muscular 35-year-old black guy wearing only purple boxers with dusty looking corn-rows of hair. The black skin on his bare chest glistened with sweat. Beside him stood a short overweight blonde with red cheeks and sad tired-looking blue eyes. She leaned into his shoulder, hugged his arm and stared at the floor.

Harry took a position against the opposite wall. I was glad Harry was there because I could tell immediately this guy wanted to fight.He was going to be a handful.

Before I could respond, Harry pushed the man off balance and reached behind him. From the waistband of the man’s boxers, Harry grabbed a small .25 caliber handgun. The man recoiled and knocked the gun loose from Harry’s grasp. It hit the floor and tumbled down the stairs. Harry dove for the gun. I cross-checked the guy into the wall allowing Harry to recover the loose gun.

The guy spun me around and I fell backwards. I grabbed for the guy’s sweaty arm and pulled him down the stairs with me. Both of us fell down the stairs and landed on Harry. I heard a sickening internal pop from Harry’s forearm breaking.

The guy then tumbled past me, head-over-heels, towards the kids standing at the bottom of the stairs, his screams echoing in the stairwell. I gathered myself up and followed the guy. When I got to the sidewalk I grabbed the guy from behind around the neck to control him with a chokehold.

I could feel the guy gathering strength. Then my head jerked back in pain.

“Leave my man alone, mothafucka,” the guy’s wife screamed as she grabbed a handful of my hair.

I was in deep shit now. So I reached for my gun belt and unsnapped the canister of mace. I was grateful the nozzle came out of the holster pointed in the right direction.

I closed my eyes, held my breath, and sprayed into the guy’s face. He screamed, and I could feel his knees buckle and his body go limp. I released the choke hold and let the man fall to the ground.

Meantime, the wife still has me by the hair, and I threw an elbow backwards into her nose. She shrieked in pain and released the grip on my hair.

Harry got a broken arm and is going to be off for quite a while.

What a fucked up night!