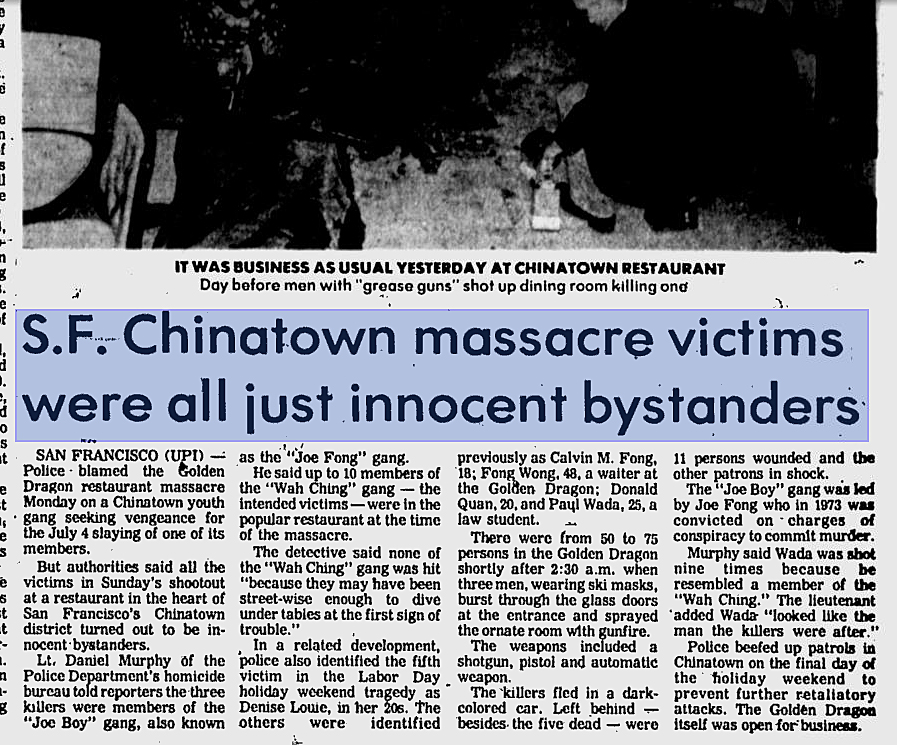 Got caught up in a massacre tonight. Looked like something right out of “The Untouchables” or the “The Godfather.”

About 0230, five Chinatown gang members walked into The Golden Dragon restaurant on Washington Street and shot up the place.

The story I got was the shooters were from the Joe Fong gang looking for their rivals, Wah Ching’s. Unfortunately, several dozen innocent people were dining there as well — probably tourists. The shooters just walked in and opened fire.

First the Zebra killers and now this. Not to mention all the other routine violence we deal with.

It came over the radio from another unit as a “406 — Officer needs help;” and you could hear machine-gun fire in the background. We were the third car to 10-97 on the scene. I could smell gun-smoke a half block from the restaurant.

When we got inside, it looked like someone had thrown buckets of blood on the ceiling, walls and floors. The place had a weird mix of smells — cordite from the gunfire and formaldehyde from all the blood.

Inside the front door a waiter had been literally cut in half, with about 20 rounds in his stomach. Nearby was a young couple, shot to death. There were at least five or six DOA and a dozen wounded. I called Communications and told them to send every ambulance in the city.

Just chaos. Blood everywhere. Felt like I was walking in peanut butter. I even slipped in it one time loading up a victim onto a stretcher. I made the TV news on Channel 7– covered in blood. When I got back to the station, I just threw my shoes in the garbage.

Oh, and how’s this? We actually had to stop the restaurant management from moving the bodies and trying to mop up the blood so they could reopen quickly for business!

I will never forget tonight.