We then got called to respond to Candlestick Park where the game had been called off and the crowd was leaving. We rolled Code Three out Third Street. I guess the bad guys in the neighborhood were licking their chops. There were reports of strong arm robbery’s and people getting pulled out of cars getting robbed. One dumb fuck chased after a bad guy who led him into the Double Rock projects where he got the shit beat out of him — but that happens all the time.

When we got there we made a show of force and cruised real slow with the car doors open and the AR-15’s pointed out. It was surreal and scary. People looked at us wondering what they should do. Rob and loot or help people. Maybe the bad guys got the message or got scared themselves by all that was going on down around them. Things calmed pretty quick – thankfully.

We hung out there until most of the crowd managed to leave. But the big problem was the Bay Bridge was closed. Hopefully everyone got home safe.

Huge Fire in the Marina District

It was starting to get dark and the hot spot – literally – was now in the Marina where a lot of buildings had collapsed and caught fire. When we got there, the scene again looked surreal. Angry flames spew plumes of black smoke skyward into a spectacular orange sunset that silhouetted the Golden Gate Bridge. 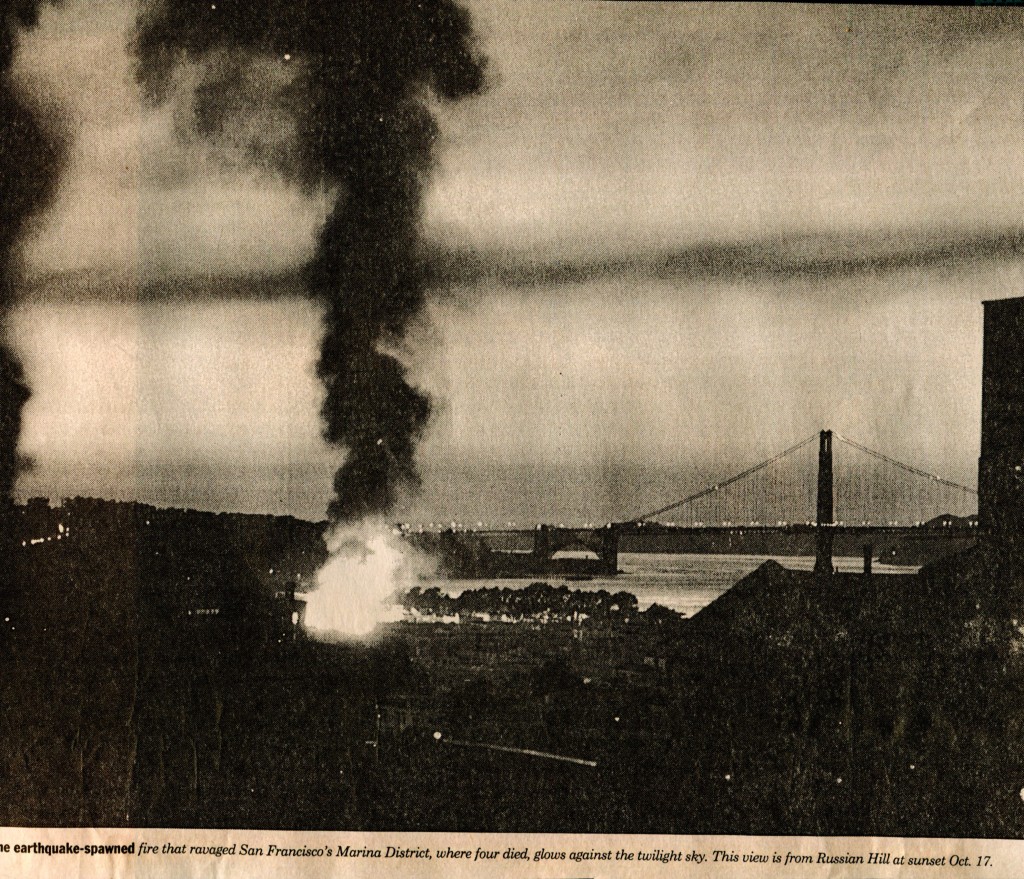 Paradox of beauty. Golden Gate Bridge at dusk and a massive fie in the Marina District.
(c) SF Examiner 1989

The paradox of beauty mixed with the realistic fear the fire was about to take off and destroy a significant portion of the city as happened in 1906. As I watched the flames grow and I kept asking myself, “Is this really happening?”

The pipes were broken and the SFFD was having problems getting water pressure into the Marina, until the fire boat managed to draft water out of the bay and pump it to the waiting fire engines.

Power back on at home

When I got home and I just watched TV. That’s problematic, too. You can overload on the images of death and destruction. I saw enough tonight in person. But I just felt glued to watch the TV.

The big anxiety of course is what’s going to happen next? It’s pretty certain there’s going to be some big aftershocks coming. But how big? One thing is clear. Today is going to be a significant day in the history of the Bay Area.

At this moment, almost 12 hours after the earthquake struck, I can’t image how my life is going to change because of 15 seconds this afternoon. It’s also incredible the Big One would strike when it did – right in the middle of the Bay Bridge World Series. Now the Bay Bridge is gone. Seems like a movie.

Maybe things were getting too easy around here. The weather the last couple weeks has been incredible. And it was so exciting with the 49ers winning the Super Bowl last year and a Bay Area World Series with all the excitement leading up to it.

Now at 0500, I’m looking out the bay window at the city—and it looks like it’s been beat-up. I’m going to bed but I am expecting to be awaken by an aftershock. Not a good feeling.

My mother is probably nodding her head in heaven saying: “I’ve always told you Phil. Just when things go good — they go bad.”