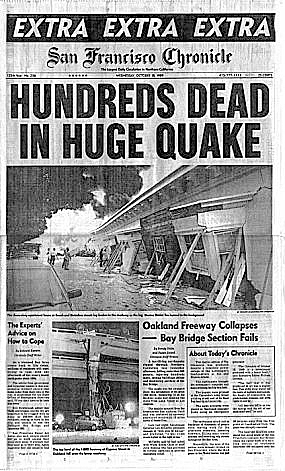 The Big One finally arrived this afternoon at 1704: 7.0 earthquake.

I wanted to spend this evening at Candlestick Park watching the Giants play the A’s in Game 3 of the World Series. But, they were asking $600 a ticket. Now fuckin’ way! I also thought of just using my star to “buzz” my way in, but Major League Baseball was handling security.

So I was home, in the condo, sitting down to watch the game on TV, when I heard a roar and the windows started shaking. I thought it was the military jets flying low over the City to do the fly-over before the game. Then the whole place started shaking and I knew what it was. I got away from the bay window, real quick, in case it shattered. Fortunately, it didn’t.

And it did — the biggest earthquake I’ve ever felt. But I wouldn’t describe the shaking as “violent.” Maybe that’s because my building is built on rock. This is called Red Rock Hill.

I can remember the March 22, 1957 earthquake when I was in the first grade — but that was only 5.5 or something, centered in Daly City. This one was centered in Santa Cruz and knocked down the Bay Bridge, and a lot of buildings in the Marina! The amazing thing is they say it lasted only 15 seconds! It started slowly then grew stronger and just about the time I started getting scared — it stopped.

I was watch off today — but I went in. San Francisco history was being written and I wanted to have a front row seat.

I got to the Hall of Justice by 6. As I drove there were thousands of people just standing on the sidewalks—wanting be out of their houses if there was an aftershock. All the traffic lights were out but I made pretty good time getting downtown.

I signed in and they assigned me to an undercover four-man car and we drew AR-15’s. We left the Hall and responded to a building collapse on Bluxome Street near 6th and Townsend in the Southern district. The top floor of an unreinforced masonry building had collapsed on cars parked along the sidewalk below. 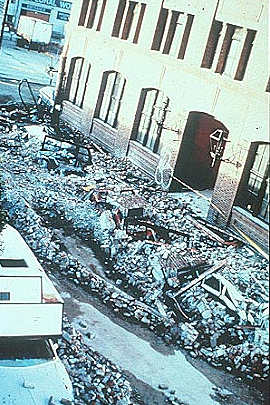 When we arrived, a ton of bricks, literally, had fallen on cars parked along the street below flattening them like pancakes and completely covering them. I presumed they contained people waiting for workers inside the building. That was a really bad scene.I saw several cops and firefighters covered in brick dust, crying, trying to see if anyone was alive. They were all gone.

The crapshoot-of-life… wrong place at wrong time. Some live — some die. Very humbling.