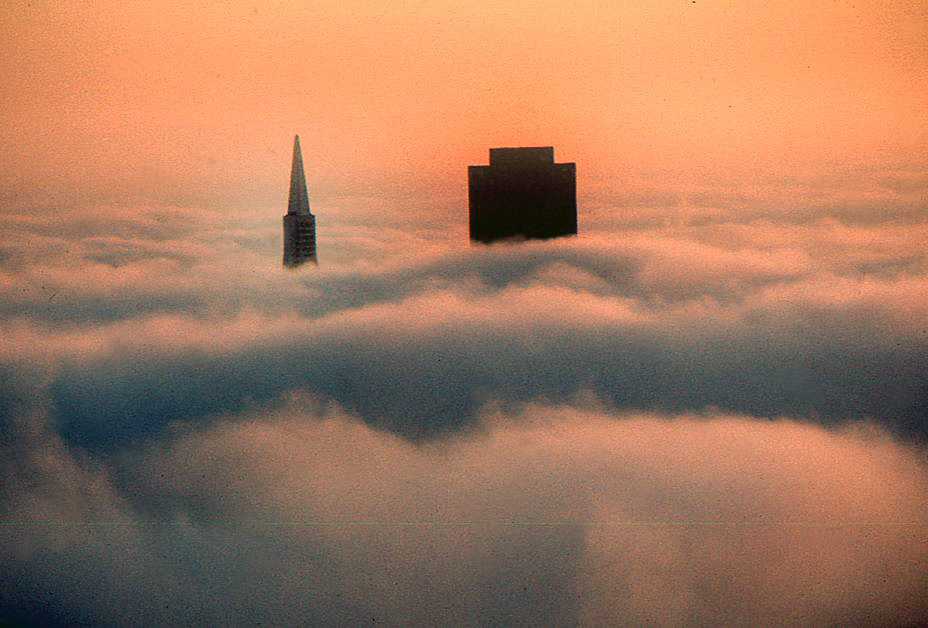 Gray fog and the BOA and Transamerica Pyramid — August 5, 1975

God, what an beautiful morning when I woke up.

The Bank of America building and the Pyramid were floating atop a white carpet of fog that extended as far as I could see. I got some great pictures.

Turned out to be a harbinger for the day ahead.

This is unbelievable! In my junior year at St. Ignatius I was head-over-heels in love with Gina Fratelli, the S.I. Homecoming Queen. But she was Pete Cassidy’s girl. Rank has its privilege, and he was the quarterback of the football team – I was only an outside linebacker.

She was a senior at Presentation – I was a junior. No chance with her, but it was fun to fantasize.

Well …Gina Fratelli and I fucked last night. Like I said, unbelievable!

I had the ball park security at the game against the Reds. A big crowd at the park. I took my break and went inside to watch some of the game. Suddenly, this really upset woman with a great ass, wearing red bell-bottom pants, appeared in front of me. She said a black kid 213’d her purse out from under her seat and took off with it. Her car keys were in the purse, and she had no way to get home.

I made a report and told her if she could wait until I got off-duty, I’d drive her home to get the spare set of keys.

I knew she was Gina Fratelli and told her I’d played with Cassidy at S.I.

She said she remembered me from the catch that won the Turkey Day championship game. We talked about Cassidy playing for the Raiders now. She said they broke up right after high school when he went to Berkeley and she went to nursing school at USF. She’s a nurse at the Franciscan Treatment Room at St. Francis Hospital.

So I had my POV and I drove her home. Her place was near mine on Gardenside Drive in Twin Peaks. I used the old credit card trick to slip the lock and opened her front door. She was impressed I could do that and invited me to stay for a drink.

I couldn’t believe it. Maybe it was the uniform and the gun but we were in her bed in ten minutes. I have never fit so perfectly in a woman. Perfect Italian body. Enough said.

She knew what she was doing. She was no rookie. It felt like I was touching the Face of God, especially when she wrapped her legs around me and trapped me inside her. She was really squirming around. I will never forget the amazement in her voice when she said, “You go so deep.” Then she just sort of went limp, and that’s all it took.

She sure wasn’t the Catholic schoolgirl I thought she might be. Until now, I thought Erica Black was the gold standard. No politics, no votes … Erica got replaced tonight. Does that mean I am now the Alpha Gentleman of S.I.?

Well, you know what? I’m an asshole. I need to grow up!

It was almost dark when I drove her back to Candlestick to get her car. I wanted to stay with her, but she said she was working tonight and gave me her number.

This is a woman I could marry. I’m not kidding. I could see myself as one of those 30-year-old guys, married, being in love with her and our two kids living in Novato or Pacifica and being really, really happy.